December 6, 2016 Worshipful Brother Leave a comment
A NEW ORDER OF FREEMASONS IS TRANSFORMING THE ANCIENT SOCIETY WITH FLAIR
In Los Feliz, across from a 7-Eleven on North Vermont Avenue, a few dozen men in their early 20s to late 80s share a dinner behind closed doors. Some wear full tuxedos with bow ties and jeweled cuff links, some have shoulder-length hair, and others wear open-collared shirts that reveal the slightest filigree of tattoo arching across their chests.
Over Italian food, retired lawyers and judges sit elbow-to-elbow with owners of scrap metal yards and vintage clothing boutiques. They hold forth on philosophy, the weather; they rib each other and joke about saving room for cannoli. As they reach for seconds, they reveal skull-cracking rings emblazoned with a compass and a square. 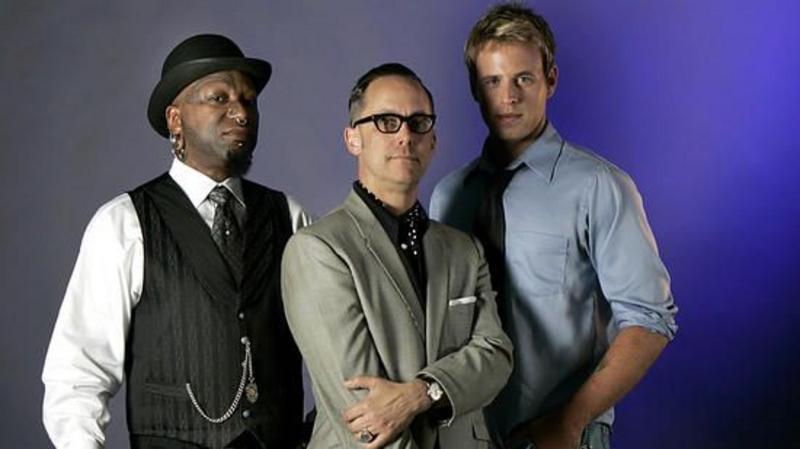 MASONS
Zulu, left, Jonathan Kanarek and Daemon Hillin, pictured in 2008, are among a wave of young Masons who are helping the secretive society gain a higher, hipper profile.
(Richard Hartog / Los Angeles Times)

Meet the millennial Masons. As secret societies go, it is one of the oldest and most famous. Its enrollment roster includes Louis Armstrong and Gerald Ford, and it has been depicted in movies such as “The Da Vinci Code” and “National Treasure.” Once more than 4 million strong (back in the 1950s), it has been in something of a popularity free-fall ever since. Viewed with suspicion as a bastion of antiquated values and forced camaraderie, the Masons have seen membership rolls plummet more than 60% to just 1.5 million in 2006.
Only now the trend seems to be reversing itself, and nowhere more noticeably than in Southern California. The reasons seem clear. In another Masonic Hall, this one on La Cienega, a Sri Lankan-born banker, a sunglasses-wearing Russian immigrant and a continent-hopping Frenchman break bread, poke at their salads and chat about their health.
“For a time it looked as if Masonry was going into a sharp decline, if not the death throes,” said UCLA history professor Margaret C. Jacob, who has written extensively about the fraternal order. “But it looks like it may be making a comeback.”
That’s because the Freemasons, whose tenets forbid soliciting or recruiting members, have enthusiastically embraced the Internet as a way to leverage curiosity about an organization with its roots in Europe’s medieval stonemasons guilds. Freemasonry today sees itself as a thinking man’s salon, a learned society with a philanthropic bent.
“We had a record number of new members last year,” said Allan Casalou, grand secretary of the Grand Lodge of California. “We added 2,000 men, which is the most since 1998 and our seventh straight year of membership increases.”
And, to paraphrase that Oldsmobile campaign, these definitely aren’t your father’s Freemasons. They are bar owners, male models and olive-oil brokers. They are men like Zulu, an L.A. tattoo artist with a swirling Maori-inspired design inked across his face and a panoply of metal piercing his ears, nose and face. They are men like Jonathan Kanarek, who runs a men’s vintage clothing store on Hollywood Boulevard and whose retro chic wardrobe of polka-dot ascots, glen-plaid jackets and smartly pressed pocket squares earned him a spot on Esquire magazine’s 2007 list of best-dressed real men in America. And they are men like Daemon Hillin, whose surfer-dude looks and blinding white smile can be found on Japanese TV, where he plays sidekick and comic foil to the Japanese version of the Hilton sisters.
They are also all men who want to be part of an all-for-one and one-for-all brotherhood built on shared ideals, philosophical pursuits and a penchant for rings, aprons and funny hats. As Zulu bluntly put it: “I joined because I was looking for people to hang with that were like-minded but also hip and cool, and a lot of tattoo artists tend to be drunks and druggies.”
Hillin, who originally joined the Masons in Temecula, moved to L.A. and is interested in the Santa Monica-Palisades Lodge No. 307, one of the youngest and most diverse congregations in the state (the average age of active brothers is just 33). The lodge’s senior deacon, Jim Warren, calls it ” ‘Star Trek’ without the chicks.” “We have every possible national origin, ethnicity and religious denomination you could imagine,” he said.
Warren credits the Internet. “We were one the first lodges in the state to have a website up,” he said. “That led to a huge spike in membership.”
Other lodges followed suit, putting up their own sites and drawing a crowd. That’s how prospective Mason Johnny Royal ended up at the door of Elysian Lodge No. 418 last month. Intrigued by the distinctive Masonic architecture that graces most halls, the 31-year-old publicist with sideburns to his chin and hair to his shoulders and a Renaissance lute player tattoo on his right forearm hit the Web.
What he read about the Masonic ideals — wisdom, strength, beauty and the pursuit of knowledge — made him decide to pursue membership. “My generation wants to be part of something beyond itself,” Royal said. “I want to learn; I want to participate.”
The Web generation
The Internet hasn’t only made it easier to learn about the Freemasons, Casalou says, it’s changed the type of men coming forward. “There is so much information on the Internet that by the time someone comes to a lodge to seek membership, they already know a lot about Masonry,” he said. “Which is a big departure from previous generations. And it means they are more likely to be active participants.”
Zulu became curious about Freemasonry after tattooing Masonic symbology on several clients. He joined five years ago at age 39 and now serves as webmaster and senior warden of North Hollywood Lodge No. 542. He has also gone on to become both a Scottish Rite Mason and Shriner (Masonic membership is a prerequisite for both), and next year he will become the leader of his lodge. “I’ll be the first black worshipful master in the lodge’s history,” he said, using the proper term of respect.
But he probably won’t be the last. Because California’s contingent of Freemasons is expected to grow, the average age of its members, once 71 and now 65, is expected to drop. By 2018, as Casalou predicts, the state will be awash in 55-year-old pre-retirement Masons giving each other secret handshakes, wearing ritual aprons and invoking the Grand Architect of the Universe.
The Internet continues to help. Zulu said that he gets at least four emails a week from prospective Masons around the globe who see his tattooed and pierced visage at the lodge website and want to be reassured such an alternative look isn’t a barrier to membership.
“Yeah, I think it’s going to become hip and chic to be a Mason,” Zulu said. “And that could be a dangerous thing.”
adam.tschorn@latimes.com
Copyright © 2015, Los Angeles Times